Dr. Christina Bache is an Adjunct Professor in International Affairs and an Associate Researcher at the Centre for Migration, Diversity, and Justice, Brussels School of Governance and Vrije Universiteit Brussels. She is also a Research Affiliate at Queen’s University. Previously, she was a Visiting Fellow at the London School of Economics and Political Science, IDEAS, and Visiting Fellow with the Wilfred Martens Centre for European Studies, the in-house think tank of the European People’s Party.

Christina’s professional interests are multi-disciplinary, focusing on responsible business practices, livelihood security and economic inclusion of vulnerable groups, forced migration, and the meaningful inclusion of women in fragile and conflict-affected environments. She has conducted peace and conflict assessments and strategic evaluations in the fields of humanitarian assistance and development coordination for the International Labour Organisation, European Parliament, German development agency (GIZ), and NGOs, including SPARK and Verite. In addition, she has served as a civil society representative for the European Union’s working group on the implementation of the Women, Peace and Security Agenda, contributed to a European Parliament-supported study on a progressive European foreign policy agenda, wrote a report on the role of women in peace and transition processes for the European Parliament’s Committee on Women’s Rights and Gender Equality, and co-wrote policy briefs on development, equity, and inclusion in development assistance for the Biden-Harris administration as a member of Women of Color Advancing Peace and Security.

Christina has held pro bono roles, including serving as Chair of the United Nations, Global Compact Principles for Responsible Management Education, Working Group on Business for Peace, Co-Chair of the International Crisis Group’s Ambassador Council, Co-Founder of the Women in Foreign Policy Turkey Chapter, and Administrator of the Syria Support Network. In addition, she is a member of the network for Academic Friends of the European Peacebuilding Liaison Office, Hollings Center’s working groups on Profits to Peace, Iraq’s Foreign Policy and Economic Challenges, and U.S.-Egypt Relations, the Research Center on Gender, Diversity, and Intersectionality at Vrije Universiteit Brussel, the Middle East Research Network on Internal Displacement and Migration, Business and Society.

Visions for Diversity, Equity, and Inclusion in Development: Considerations for a New US Administration 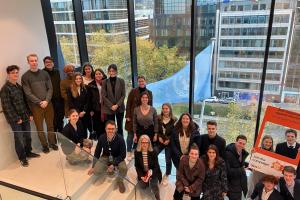