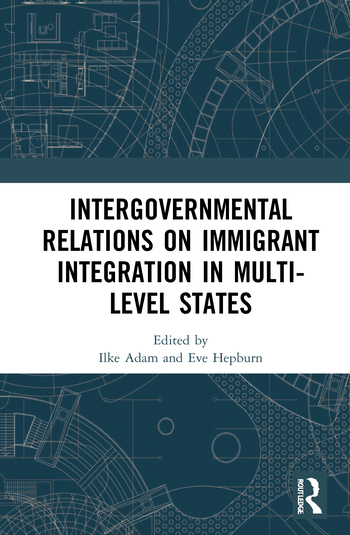 Did you think that the coordination of immigration and integration policies across policy levels is only complex in Belgium? Well, that is a mistake! In their new book, Ilke Adam, Eve Hepburn and the many contributors show how coordination of immigration and immigrant integration across policy levels is also a complex matter in other federal and multilevel states. During the last decennia, migrant integration has increasingly been shifted to both the international level (EU and international organisations) and the local level (regional and local authorities), as well as to external actors (countries of origin or transit, NGOs, private actors).

While the integration of migrants has traditionally been seen as a national matter, this fragmentation of policymaking powers increases the need for coordination. Ilke Adam: “Integration, equal opportunities and anti-discrimination is not a matter of one policy level or one policy sector. Like gender equality and sustainable development, it requires intense cooperation and decisiveness.”

The authors compared four countries characterised by a complex state structure – Belgium, Canada, Italy and Spain – and showed that discussions on the integration of migrants have slowly but surely penetrated the interaction between states and between levels of government. For example, specific intergovernmental agreements, councils or committees have been established. Moreover, the integration of migrants has been mainstreamed in intergovernmental discussions in sectoral committees and councils on employment, housing, health and education.

The researchers also tested the drivers of cooperation between policy levels. Regions that strive for more autonomy, such as Flanders, Catalonia, South Tyrol, Scotland and Quebec, are more often in conflict with the central state on integration.

The book was previously published as a Special Issue of the scientific journal Regional and Federal Studies. On 29 October, Ilke Adam will participate to a debate on the role of cities and local authorities in migration and integration policies at the Facts-To-Act Festival organized by the Hannah Arendt Institute (in Dutch). The European H2020 Whole-Com research project, in which BIRMM-VUB is the Belgian partner, will study the role small and medium towns and rural areas in immigrant integration, as well as their interactions with other localities.